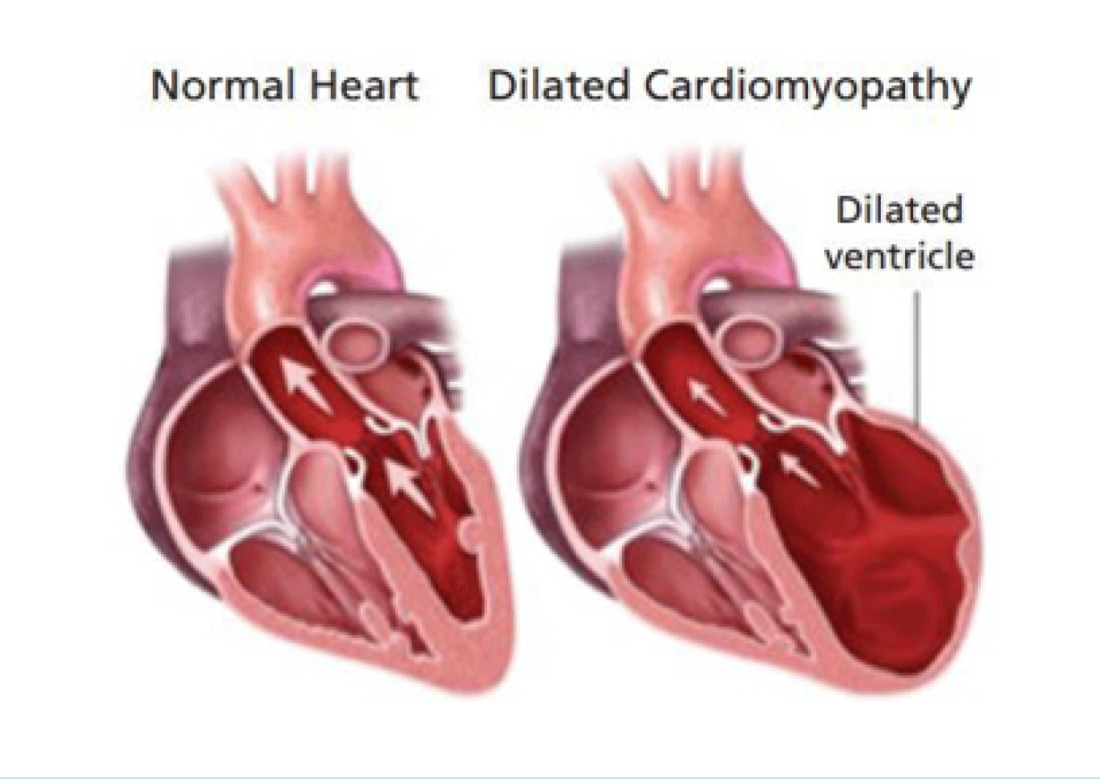 The term heart disease usually conjures up mental images of men and women doubling up in pain while clutching their hearts. One doesn’t generally think of pets as suffering from them. However, cardiomyopathy, any disease involving primarily the heart muscle, is extremely prevalent in dogs. In fact, dilated cardiomyopathy (DCM) is one of the most common heart diseases in canines.

DCM is a progressive myocardial disease. It results in the loss of cardiac contractility and efficacy in both the atria and the ventricles. Although both or either sides of the heart can be affected, DCM of the left side is more common. DCM is more common in large dogs as compared to small ones although there are some exceptions such as cocker spaniels and springer spaniels. Just as in humans, heart disease is predominantly seen in middle aged to older dogs. Male dogs are more at risk than females.

The cause of DCM is still unknown. Some breeds are more predisposed to it e.g. Doberman Pinschers, Boxers, Great Danes, German Shepherds, Irish Wolfhounds, Scottish Deerhounds, Newfoundlands, Saint Bernards, Afghan Hounds and Labrador Retrievers. Hence, DCM is thought to have a familial hereditary cause. Some studies have shown that DCM in Doberman Pinschers is caused by a mutation in the pyruvate dehydrogenase kinase 4 (PDK4) gene. Most dilated cardiomyopathies are idiopathic, although some are secondary to nutritional deficiencies or infections e.g taurine/carnitine-responsive or parvovirus-induced. Taurine-responsive DCM is found mostly in American Cocker Spaniels and Newfoundlands. DCM due to carnitine deficiency has been noted in Boxers deficiency, Doberman Pinschers, Great Danes, Irish wolfhounds and other giant breeds.

What happens during DCM?

DCM is characterized by the dilation of heart chambers with myocardial wall thinning. All four chambers of the heart may be affected. Weak cardiac muscles lead to blood accumulation in the heart  and  lungs  which,  in  turn,  lead  to  an  increase  in  heart  size  and  congestion of  the  lungs respectively. Wall thinning is a result of ventricular stress. Cardiac function and renal blood flow decrease as the disease progresses. Fluid leaks into the lungs (pulmonary edema) or around the lungs (pleural effusion) or into the belly (ascites). Finally, prolonged and excessive compensatory stimulation of the myocardium leads to ventricular arrhythmia and heart failure. In case the left side of the heart is affected, severe DCM leads to congestive heart failure and pulmonary edema. In the case of the right, DCM results in congestive heart failure and ascites or pleural effusion. Atrial cardiac arrhythmias are either atrial fibrillations or supraventricular tachycardias. Ventricular cardiac arrhythmias are ventricular premature complexes or ventricular tachycardias. Ventricular tachycardia is common in Doberman Pinschers and Boxer. Atrial fibrillation is seen in very large dogs. Arrhythmias usually result in congestive heart failure.

How is DCM diagnosed?

Clinical signs vary depending on the breed and stage of DCM. In the early subclinical phase, dogs do not show any outward signs of DCM but ECGs (electrocardiogram) can detect arrhythmia and abnormal heart sounds. In the later symptomatic stage, common signs are a loss of appetite, coughing, labored breathing, weakness, lethargy, fainting and pale gums. Depending on the side of the heart affected, thoracic radiographs show cardiomegaly, edema or ascites and/or pleural effusion. Blood pressure increases but the femoral pulse is weak. The characteristic symptom on auscultation is a soft heart murmur at the left cardiac apex. A subtle gallop sound may also be heard. A Holter monitor strapped to the dog is used to record ECG over a 24 hour period. Ultrasonography is performed to visualize heart wall thickness and evaluate cardiac function. Blood  tests show increased BUN and creatinine. Taurine levels can be confirmed using blood tests while carnitine deficiency is detected by myocardial muscle biopsy.

Is there any effective treatment for DCM?

The aim of DCM therapy is to improve heart function, reduce fluid accumulation, level  blood pressure and control cardiac arrhythmia. Treatment is oral or by injection depending on the severity of the disease. If the case presents with congestive heart failure, treatment for heart failure is administered. In nutritional deficiency cases, taurine or carnitine supplementation may be prescribed depending on the prognosis.

DCM, however, is not reversible. Prognosis varies by breed and severity at the time of detection. DCM is called a silent disease as it stays hidden for long periods of time. By the time clinical signs become evident, the disease is in advanced stages. At this stage, on average, the prognosis is 6 to 24 months of survival and quality of life is low. Dobermans are more severely affected. During and after treatment, the pet continues to require regular check-ups and pet owners need to stay alert to any signs of relapse or worsening. Even in the case of supplement-responsive DCM, prognosis is often not favorable and lifetime treatment may be required. Those dogs that have progressed to congestive heart failure have very low chances of survival. In spite of the odds, treatment is recommended to improve the condition of the dog.

Pet owners and veterinarians need to realize that heart disease in dogs can be just as important and dangerous a disease as in humans. They need to stay vigilant to any signs or symptoms of heart disorders, especially if the dog is a susceptible breed. Early detection and treatment can definitely improve a dog’s quality of life and length of survival. DCM may be a silent killer but it does not mean it cannot be controlled.